During the summer of 2012, I conducted an experiment pertaining to mobile solar panels. This experiment was performed in the context of the IB Extended Essay.

The title of the experiment is: An Investigation into the Energy Budget of Moving and Immobile Flat Solar Panels

Please note that this is still a work in progress and, although the experimentation is done, the different sections of the experimental report are not final and are subject to change.

The submitted paper can be found here

In order to perform this experiment, a unique algorithm for finding the sun’s position was created and used with a Lego Mindstorm NXT to make the panel move. The robot was constructed as a motorized frame giving support to a small solar panel that captured the light emitted by a regular 60W light bulb.

In order to avoid sources of external light, the robot, panel and light bulb were placed in a sealed box. The algorithm developed calculated the Zenith and Azimuth angles of the sun and the robot would set the panel’s position accordingly.

The experiment showed that the viability of a moving solar panel is dependent on the efficiency of the motor and, that there is a correlation between the net energy production of the motorized system and the period of the year during which the motorization is employed. The research shows that, assuming the motorization system is efficient, the panel should be motorized during the summer.

The sun is a powerful source of energy, and it can be harvested through solar panels to create clean and truly renewable energy. The main components of the sun are Hydrogen and Helium. The Hydrogen is transformed into Helium by a fusion reaction, which releases a large amount of energy. This energy release takes the form of Electro-Magnetic Radiation.

As humans, we can only see a particular fraction of the light emanating from the sun: the visible spectrum. The visible spectrum contains Electro-Magnetic Radiation whose wavelength varies from 400 to 700 nm (De Lloyd,1). This radiation emitted by the sun, mostly in the visible spectrum, can be harnessed and converted to heat or electricity by solar panels.

The conversion from visible radiation to electricity is done by photo-voltaic cells. These cells are made of two thin sheets of silicon, or another semiconductor, separated by a small gap. When photons of light hit the semiconductor, it releases an electron which travels to the other sheet, thus creating a flow of electron, therefore creating an electrical current. This is modeled in Figure 1.

Cells are connected in order to create arrays of photo-voltaic cells. The panels on which these arrays of photo-voltaic cells are places are called solar panels. The cells on a solar panel are connected in series and parallel to increase the energy produced by the solar panel. Solar panels are always flat and usually rectangular in shape. Although most solar panels are non-moving, some are motorized in order to reduce the percentage of light reflected off the panel glass due to the exposed sunlight coming at an angle, which increases the amount of photons arriving at the front contact. These motorized panels are also exposed to the sunlight for longer periods of time and thus creating more electricity. The goal of this investigation is to experimentally determine if the motorization of a solar panel is beneficial. This will consider not only the energy produced by the panel but also the energy consumed by the motors. This investigation will also attempt to determine if there is a certain period of the year where it is better for a solar power to be motorized in any location with the latitude of 55.1 degrees, which is roughly the location of Edinburgh in Scotland.

The assumptions made during this experiment are outlined here:

The second assumption is that there is no absorption of light by the atmosphere and thus, the light source is directly in front of the solar panel and the light emanating from the light source only traverses air.

The third and fourth assumptions are made in order to perform the experiment with the limited materials available, notably, that the Lego Mindstorm NXT Brick can only control 3 motors, and, if both the light bulb and the solar panel were to move, then the number of motors would be greater then 3, specifically 4.

In order to perform this experiment, an experimental setup must be built using the Lego Mindstorm NXT kit. The robot is made of several parts, each essential for a particular part of the experiment and should be built in the order in which they are presented in this paper.

The first part to be built for this experiment is a panel holder (see figure 2). In order to build the panel holder, the following pieces must be taken from the Lego Mindstorm NXT Kit:

The pieces listed above were assembled into figure 3

After the solar panel mounting device, an articulation was created using two Lego NXT Motors. This was done by taking a small stick and placing it in the first motor followed by a separator. The motor block was completed by attaching the second motor to the stick. The motor block (figure 4) was attached to the panel holder using vertical to horizontal Lego converters. Figure 5 shows the whole robot assembled.

Figure 4 shows the motor block which is essentially two motors stacked onto each other.

Figure 5 shows the robot complete with both motors and the solar panel holder.

Figure 6 shows the robot in the cardboard box.

In order to build this program, the RobotC software was used. This enables the user to program the Lego Mindstorm NXT in C.
The Azimuth of the sun is the angle from the south where the sun is and the Zenith angle between the normal of the latitude plane to the sun.
The Algorithm for the Program was created for this experiment. In order to develop this algorithm, two models were created and many calculations were made. The Azimuth of the Sun as seen on earth. The model presented in figure 7 shows the earth in the center of the circular orbit of the sun. This orbit was used to find the formula for the Azimuth and the Zenith as seen from the Earth. 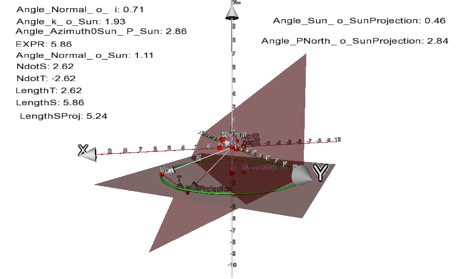 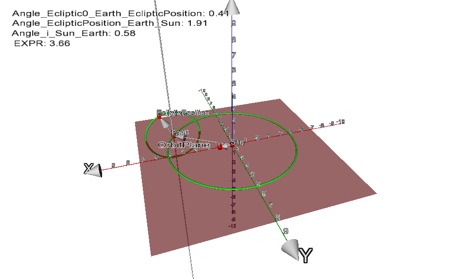 Figure 8 shows the Model used to find the absolute Azimuth and Zenith of the sun.
The following formulas are the formulas from the calculations done using the models shown in figure 7 and 8:

All calculations for the creation of the algorithm can be found here.

First, place the motorization system and the panel in the center of the box. Use duck tape to make the base hold. Place the cables from both motors through the flap and out of the box. Connect the solar panel to the alligator clips provided with the Lascar El-USB data loggers. 2 alligator clips should be connected to each lead of the solar panel. Place the end of the wires through the flap and seal off the flap with duck tape. The flap is sealed so that no exterior light comes through.
Take one wire from each electrode and connect it to the Lascar El-USB voltage data logger cap and label the cap and wires “voltage”. Do the same for the Lascar El-USB current logger but label the cap and wires “current.”
Rotate the panel so that it is parallel to the side of the box opposite the flap. Place the lamp in line with the panel, on the parallel side opposite the flap. Plug the lamp into the dSwitch and plug the dSwitch into a power socket. Now connect the d-Switch to motor A on the NXT Brick.
If the run is for the panel following the sun, do not plug any motors in the nxt brick.
If the run is for the immobile panel, plug both the azimuth and elevation motors in the nxt brick. Plug the motor controlling the Elevation of the panel in motor port B and the motor controlling the Azimuth of the panel in motor port C. If the panel is moving, place the Vernier current logger attached to the nxt brick so as to measure the current consumed by the robot. Connect the Vernier labquest to a computer running the “logger pro” software.
Once this is done, position the robot with the panel towards the lamp and close the box with duck tape. Start the data loggers, plug the Lascar El-USB data loggers into the appropriate cap. Configure the program with the date and latitude of the test run. Run the program while recording the current and voltage of the panel. If the panel is moving, record the current and voltage of the nxt brick.
Save the recorded data to a computer and proceed to the next run.
The timebase of the program is 10 real life seconds are equivalent to 30 minutes of simulation. With 24 hours in a day, this means that each run will be 480 seconds, thus each run will last for 8 minutes in real life.

Figures 9 and 10 are the summary tables of the data taken throughout the experiment.

Figure 9 Shows the Average Energy Output of the Moving Panel.

Figure 10 shows the average Energy consumed by the Robot.

Figure 11 shows the average energy created by a flat immobile panel relative to the day.

First, the best time period to motorize a solar panel would be approximately around 90 to 240 days after the winter solstice. This is the best period as it is the period of time when the moving panel produces the most energy. This first conclusion is true only for the model panel when assuming that the motorization system consumes 0.15 Watts/Hour of energy or less. Generally, the best period of time to motorize a solar panel is during the summer.

Although this experiment did find answers to the two questions it was designed to solve, the experiment did generate some extra research possibilities that may increase the effectiveness of a solar panel. The first question stems from the second assumption that says that the atmosphere does not reflect or absorb any light and thus, that 100% of the sun light arrives on the panel. This assumption is not always true as many factors may reduce the percentage of light coming through the atmosphere. Such factors include weather and pollution. Thus, the question of how much light the atmosphere absorbs may play a very large role in predicting that a panel will have a greater yield in the summer or winter.

The first assumption, saying that the earth orbits around the sun in a perfect circle, was created as a simplification for the self-created model. The earth orbits in a very slightly elliptical orbit. A further investigation could determine how much this variation in orbit affects the energy created by flat solar panels.